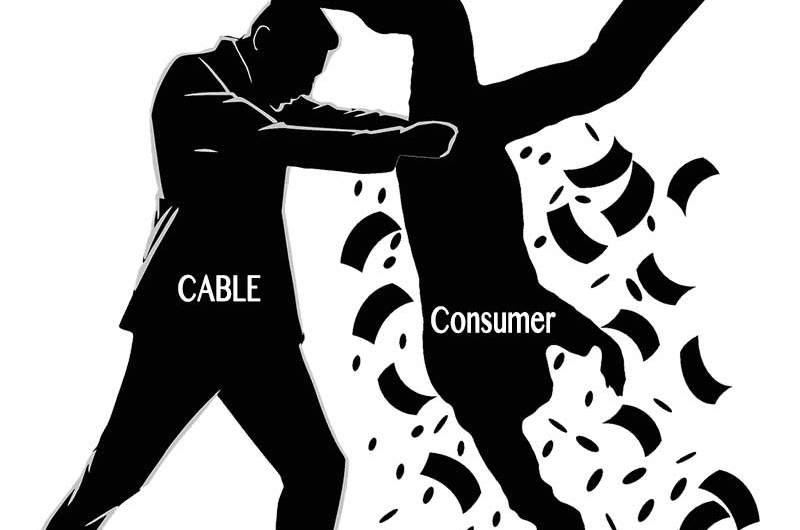 Cable and satellite TV/Internet companies have some of lowest satisfaction ratings in this country.  And yet customers continue to reward them with their business.

Why are the prices so high and the service so bad?

The American Comsumer Satisfaction Index survey found that TV/Internet providers ranked near the bottom of the 43 industries it studied, a 7 year low.  That result followed the previous year’s survey finding that the TV/Internet industry tied for the lowest score out of all industries surveyed.

Comcast ranks at the very bottom of the Index, underperforming even the rest of the cable industry, where “high prices, poor reliability, and declining customer service” are endemic.  Comcast earned Consumerist’s “Worst Company in America” title twice, first in 2010 and again in 2014.

In 2014, Senator Claire McCaskill called her TV/Internet company about a charge on her bill.  An agent for the firm acknowledged that the $10 a month charge was no longer justified because the service was now included in the basic package. More recently, she was charged $10/mo. for a protection plan that was not necessary.

To begin with, approximately 30% of customers reported they were not quoted the full or correct package price.  Almost all of the companies start with a promotional price which increases to a normal price that may be more than twice as much, buried in the small print.  All of the companies raised their rates, some as much as 33% in 2 years.

Sen. McCaskill described the business model as “figure out a way to make the entry price as low as possible; figure out how to roll people off that entry price as quickly as you can, and then deal with their anger once the price has gone up.”

The companies charged additional fees for equipment rental or service contracts that were not obvious. They have also have been hiding new fees, such as broadcast television fees and regional sports network fees in the small print.  Time Warner, Charter and Comcast were charging for services they did not deliver.

The report estimated that Time Warner Cable will overbill customers nationwide a total of almost $2 million in 2016. Charter has told the committee it has overbilled customers by about $443,000 a month, based on data from 2015 and 2016.

Comcast is being fined $2.3 million for billing customers for products that they never ordered. The fine was part of a settlement with the Federal Communications Commission, which says this is "the largest civil penalty" it’s ever issued a cable operator.

The companies did a good job of extracting as much money as possible from their clients, but a poor job at customer service.  60% of Time Warner, 42% of Charter and 36% of DirecTV customers said their problems were not resolved in the first phone call.

Customer service reps are trained to prevent you from downgrading or canceling. When customers did call about a problem, they had to listen to sales tactics.  When customers decided that they wanted to cancel their service, they faced difficulties in doing so. To cancel, customers must either visit a retail store or call and speak to a company’s “retention” agent.

A Center for Public Integrity analysis of Internet prices in five U.S. cities and five comparable French cities found that prices in the U.S. were as much as 3 1/2 times higher than those in France for similar service.   New Yorkers pay about $55 for 25mb, nearly double the price in London, Seoul, and Bucharest, Romania.  Residents in Hong Kong, Seoul, Tokyo and Paris get speeds nearly eight times faster.

Why do Americans pay more for slower service, with poor customer service?  It’s because of limited competition.  Consumers in France have a choice between a far greater number of providers — seven on average — than those in the U.S., where most residents can get service from no more than two companies.

There are too few Internet providers with too much money, and Congress has been paid off. Comcast is the seventh-largest single source of lobbying dollars on Capitol Hill, spending $18.8 million to lobby Congress and federal agencies. The National Cable and Telecommunications Association, which spends $19.8 million, is the fifth.

In France, the cable companies are required to sell access to their competitors. We had a law like that in this country from 1996-2005 but it was killed by lobbyists. State lawmakers have also passed bills that make it illegal for communities to provide their own Internet service.

As Senator McCaskill said, we have to “fend for ourselves” Fortunately, there are better options for TV like streaming services and digital TV antennas. And we have many options for Internet phone service.  Stay tuned to our blog for more information on how to fight back.